Interview with Rock Your Lyrics 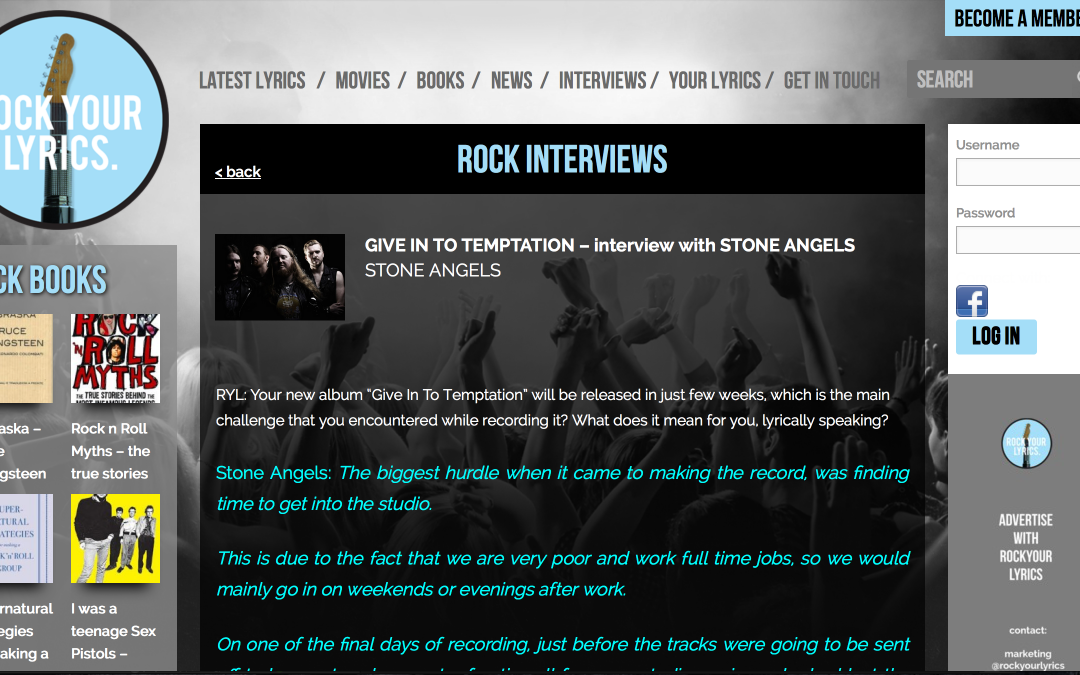 RYL: Your new album “Give In To Temptation” will be released in just few weeks, which is the main challenge that you encountered while recording it? What does it mean for you, lyrically speaking?

Stone Angels: The biggest hurdle when it came to making the record, was finding time to get into the studio.

This is due to the fact that we are very poor and work full time jobs, so we would mainly go in on weekends or evenings after work.

On one of the final days of recording, just before the tracks were going to be sent off to be mastered, we got a frantic call from our studio engineer; he had lost the recording for James’ solo on “Thousand Years”, so James had to race down after work from Worthing all the way to Newhaven during rush hour to get it done in time.

Other then that, the whole process was relatively stress free.

RYL: Tell us everything about the song “Fantasy”

Stone Angels: Well, it’s the classic case of going out with the lads, seeing a nice woman while you’re out, and still knowing that she’s never going to be any good for you, you still go for her anyways, bringing her home for some fun in the bedroom, and trying to make her change her ways while you have you way!

RYL: Is there a common meaning/theme between all your songs?

Stone Angels: We wouldn’t say that there was a common theme between the songs so to speak, although each member of the band contributes to the material; the main songwriters are Niall and James and both their styles are influenced by a mixture of reality and fantasy.

Some songs are based on real life experiences while others are completely made up, but a few times on the album there are a some songs that are a nice cocktail of both.

RYL: who gave you the best advice in your career?

Stone Angels: That’s a tough one to say, James studied at BIMM (Brighton’s Institute Of Modern Music), his teachers were full of good advice from their own experiences, but the main thing that stuck with him is that when it comes to writing a song, if you can make it sound good just on an acoustic guitar, it will sound phenomenal with a band behind it.

Niall studied at Access to music where he took some songwriting lessons during his courses, from the singer of the mid 90s alt rock band Gene where he learnt that instead of trying to fill a song with deep meanings, its just as good invoking a good story to entertain the minds of a listener as a great book would.

RYL: how do you, usually, write the lyrics and music of your songs?

Stone Angels: Well the process for each song is different, as you never know when inspiration will strike; Niall and James have two different styles when it comes to writing a song.

Niall is better at getting the majority of a song written before bringing it to the band to work on, while James tends to bring more of an idea of the song for the band to develop together.

RYL: What is behind the verses of “Misplaced Memories”?

Stone Angels: Misplaced Memories is about trying to escape some of the bad times in the past by pushing the feelings deep down inside and attempting to forget the regrets that have happened no matter the amount of reminders that may pop up during life and travels, especially certain people that remind you of those old feelings and regrets again, even if it slowly sends you a bit crazy.

RYL: Which is the most important thing for you while doing music?

Stone Angels: The foremost important thing for us is that we enjoy it. When we are having fun onstage, the crowd recognizes that and they feed of the buzz, which makes us enjoy it even more… it’s really a vicious cycle!

At this stage of our career it really is a labor of love, there isn’t anything in the way of money coming in at this point, but each show gets a little bit bigger and a little bit better.

Hopefully before too long we will be able to quit the 9 to 5 lifestyle and do this full time.

RYL: and the best verse you ever wrote?

Stone Angels: Niall’s best verse is the first verse from ‘Thousand Years’ A light that fades into the night, now I don’t have any strength inside, I’m alone to the world/My life is bleeding black and white, my days regress down into night, I can’t resolve this fight.

It’s a bit of a dark one, talking about giving up on giving up, just watching the days pass on by when leading a bit of a boring and stagnant life where you’re doing the same routine over and over again each day.

James’ favourite verse that he wrote was the 1st verse in “Devil’s Grip” the song is fictitious and in his minds eye it’s about an outlaw in the old west about to reach his final showdown and struggling to come to terms with it.

RYL: Which is the last song you wrote (not published yet)?

Stone Angels: Well we are in the final stages of writing a very groove heavy song, its working title is “Chemical Warfare” despite its bleak name; the theme of the song is actually centered around sexual tension & fantasies coupled with a few double entendres thrown in for good measure.

We would probably say that song is about 90% complete and we can’t wait till we get added to our set list.

We headlined a show in Wiltshire recently and the crowd wouldn’t let us leave, so to quench their hunger we performed it and they absolutely ate it up!

RYL: your tour project this summer? Which is your best memory of Warped Tour?

Stone Angels: (We have never played Warped Tour, although we would love to one day). This summer we are looking to book in as many shows as possible to help push the release of the album, the gigs will see us go up and down the UK.

Earlier this year we did a small tour with an Italian rock band called Venus Mountains, we had a blast playing with them, that they invited us to come play Italy with them next year.

So provided we can raise enough for the beer and petrol, we will be heading into Europe next year.

RYL: Do you remember the day you wrote “Can You?”?

Stone Angels: Yes, the song started with the main guitar riff in the intro. James had been playing around with the instrumentation for a while before bringing it to the rest of us.

The first lyric of the song that he wrote was the chorus and we really dug the call and response between the lead and backing vocals.

At the time James & Chris were sharing a flat in the center of the North Laine in Brighton and the band would meet regularly to write new material and practice acoustically there.

It was at one of these sessions when we were practicing the chorus section that the rest of the verse lyrics really started to take shape.

The theme of the song is all about being down on your luck and fallen on hard times, and since that it something everyone goes through, it made it easy for all of the band to contribute a lyric or two to the song.