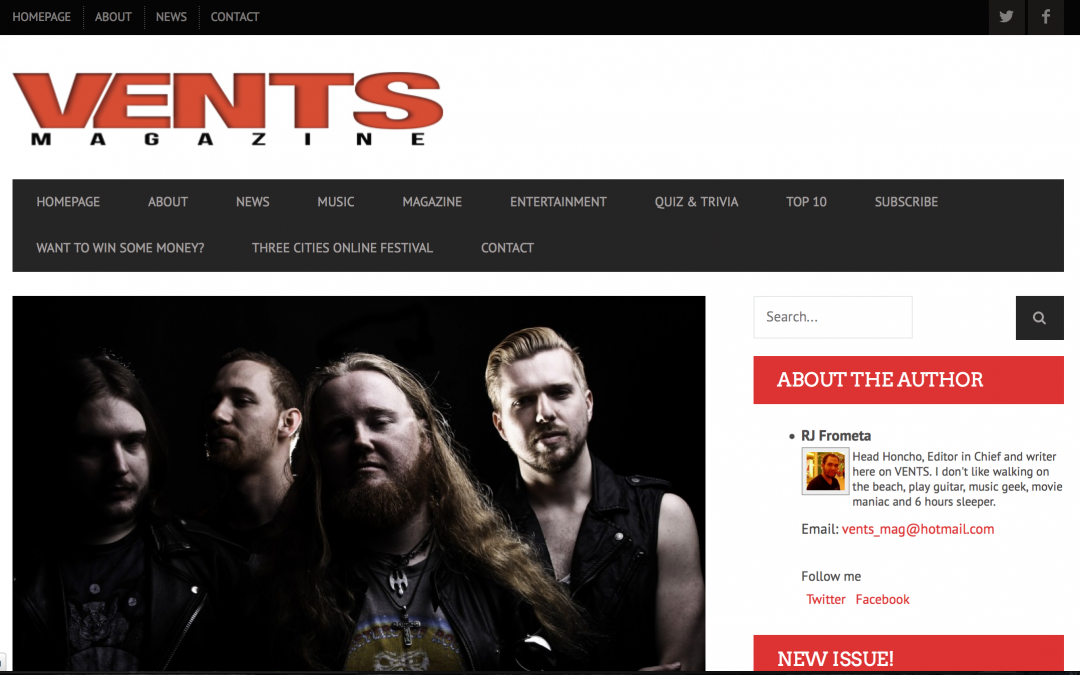 VENTS: Hi guys, welcome to VENTS! How have you been?

Stone Angels:Hi, we are very good thank you, still alive so can’t complain.

VENTS: Can you tell us more about the backstory behind your single ‘Can you?’ ?

Stone Angels: Well the songwriting for that track started off with the main riff in the intro, and as we played around with it more and begun working out its heavy groove, the lyrics started to come to us. It’s very much a song about being down on your luck at your lowest point and feeling alone and abandoned, it’s something that anyone can relate to. We feel that’s probably one of the reasons that it has been so well received when we play it at our shows.

VENTS: How was the film experience?

Stone Angels: Ha, well that was a very interesting but fun experience on a cold Saturday in February. It’s definitely shows what you can achieve on a shoe string budget as it only ended up costing us a couple of band t-shirts and a Chinese takeaway! The reason we got it done so cheaply is that two friends of the band (they happen to be brothers called Chris & Steve) run their own film production company and as soon as they heard we were making the album, they offered to do it for free as they wanted to help us out, so we thought that the least we could do was to feed and clothe them.

Luckily the location was also free as James’ parents live in the middle of a forest and they have some very run down sheds at the end of the garden that look like they could fall on you at any second. During one of Niall’s takes he lent on a support beam that nearly brought one of the sheds down. It’s safe to say that there wasn’t too much supervision on the health and safety front.

We had to wait for it to be dark to begin shooting so we started round 5pm and didn’t get finished till about 5am. None of us thought that it would take that long but luckily we had some Jägermeister & energy drinks to hand to keep us going, and due to the subzero temperatures our drinks were nicely chilled. Between takes we would be huddled round the bonfire with Jäger in hand.

It was a lot of hard work but we had an excellent time.

VENTS: The single comes off your new album Give In To Temptation – what´s the story behind the title?

Stone Angels: Well the album title actually predates the band; in fact James had wanted to use it since he was a 16 years old! Luckily he didn’t forget it. We like it because it encourages you to indulge your darker side’s desires.

VENTS: How was the recording and writing process?

Stone Angels: We had written virtually all the material for the album way before we had even thought about heading into the studio as we had been gigging up and down the country regularly for a couple of years, honing our sound.

Like the majority of aspiring musicians we are poor and work full time jobs, so we had to do a lot of weekends and odd days here and there in the studio. We recorded at Empora studios in Newhaven, it’s a really cool place where a lot of bands on the south coast go to record.

At the very start of the recording process, we went in to cut a couple of live tacks for the album so our sound engineer/producer Mark could get a feel for our sound. Skindred were storing their amp cabinets in the live room and to save space Mark plugged our guitar heads into them, unfortunately he didn’t realize how powerful one of our amps was and it resulted in blowing the speakers half way through the first song… Luckily the rest of the recording process went very smoothly.

VENTS: Coming all from different musical projects – would you say this band is a departure from what you have done in the past or more like a follow up?

Stone Angels: It really depends which member of the band you ask, for Niall and James their previous bands lent more to the Hard Rock side of the spectrum so it was a smoother transition, but for Chris and Ben that was a very different story, they had been in various Heavy Metal bands, so there were some teething issues at first trying to work out how to keep everyone happy, but the different influences are really what makes up the sound of this band and help us stick out of the crowd. The end result is a smooth blend of Heavy Metal timing with Rock N’ Roll swagger.

VENTS: Any plans to hit the road this year?

Stone Angels: Oh yes, we are constantly on the lookout for more gigs anywhere in the UK and there are plans in the works for us to be gigging as much as possible. We recently did a small run of dates with an Italian band called Venus Mountains who invited us to go and play in Italy with them, but that wouldn’t be until next year. So as long as we can scrimp and save enough beer & fuel money, we will be venturing off into Europe.

VENTS: What else is happening next in Stone Angels´ world?

Stone Angels: Well we are very busy working towards the re-launch of our album, which will be available for the public on the 4th of September. We are currently doing everything off our own backs as we are unmanaged and unsigned, so we are hoping that album launch will make a few heads turn.